On Friday I forgot to pick up my army case in the city train; I nodded off, woke up at my stop an walked out of the train. I didn't realize that I forgot my case until the next day when I wanted to continue with the second unit of Plaguebearers. I am still devastated.
I filed a notice of loss, plastered the lamp posts around all the stops on the train line with "have you seen me?" leaflets and went to the lost-and-found office. So far there is no sign of the case, but I haven't lost hope just yet. 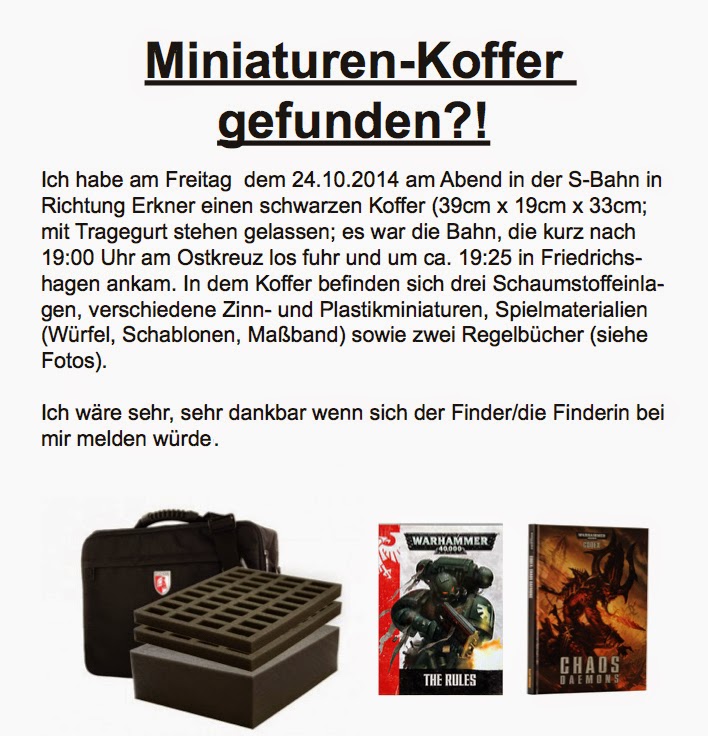 The only good thing is that my already painted unit of Plaguebearers as well as the Corpse wasn't in the case as I left them at the local GW Store to participate in the Rogue Daemon painting contest. But everything else of my Daemon army, including the codex, rule book, the Portal Glyph, the 2nd edition metal Bloodletters... everything is gone.
Eingestellt von Unknown um 16:07 Keine Kommentare:


After cleaning up the boards for the modular city scape table I now (finally) made up my mind regarding the layout of the streets. At first I wanted to align the streets horizontal/vertical (classic layout). I tried to put them in the middle and on the side of the boards to get not only enough variety, but also sufficient space to place terrain; I wanted an option where I can have rather big place somewhere if needed. After some simple paper design tests and research I decided to go with a diagonal setup.

Making sure that ankle of the street pieces is correct, so they are properly aligned when putting the tiles together was a bit of a hassle, but luckily I was able to remember some of the things I have learned in geometry classes.
So far I only have cut out cork street pieces; cork because when painted black and dry-brushed it looks like asphalt. Before I clue them onto the board I need to build some manhole covers and decide where I want to have the streets to be destroyed and to which extend. 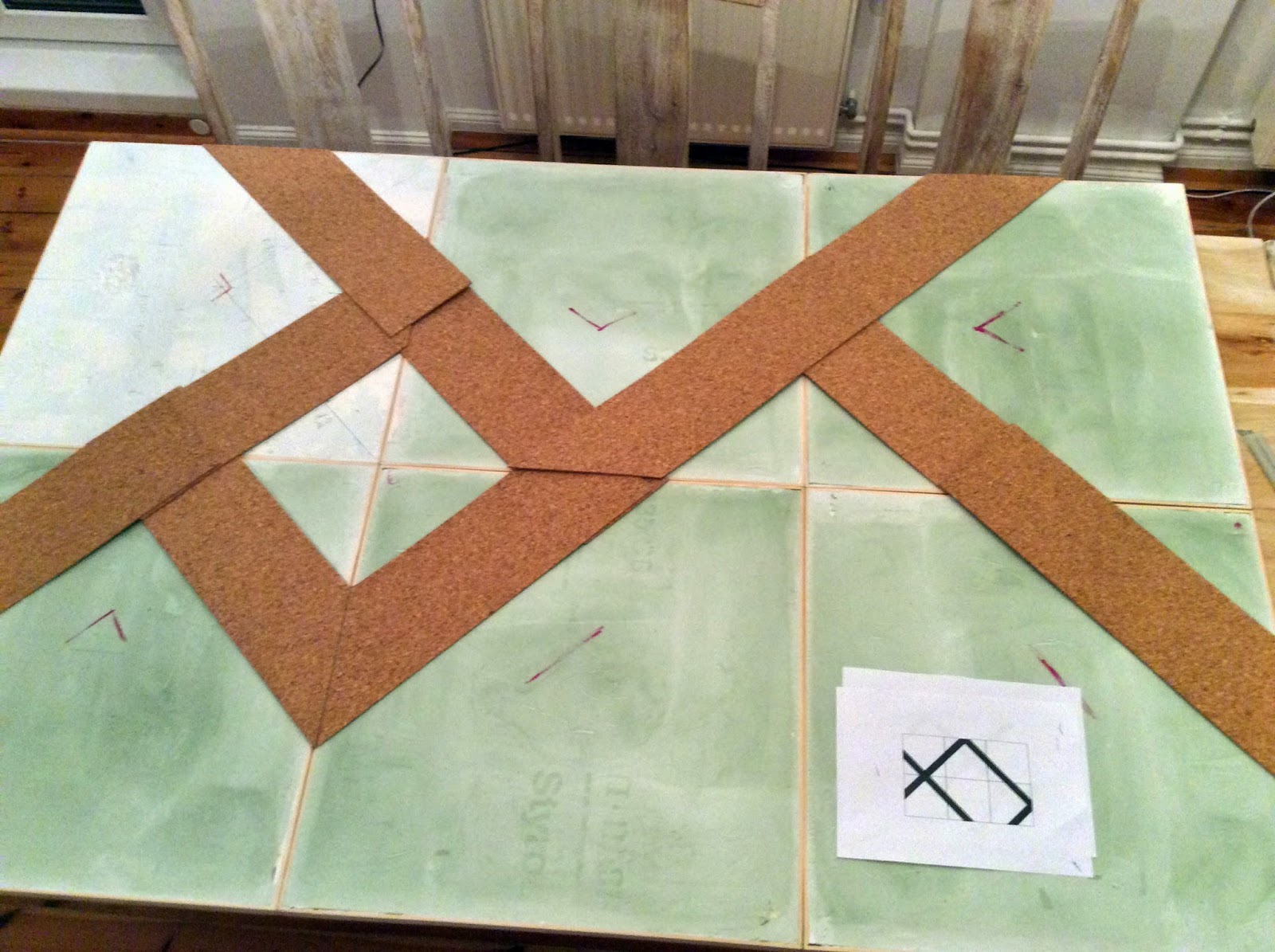 Building this modular board takes time, also because I am not 100% focused as I still building and painting my Nurgle Daemon Force at the same time, but so far I am happy, especially with the diagonal pattern as I have the impression that I can do way more different and interesting layouts.

I am working on the second unit of Plague Bearers, and even though I have my formula and the techniques set, it still takes time. At the moment I am painting pustules, a lot of them. I am not sure how many of those are on average on one of the daemons, but whatever the number is multiply it by 15 (that's how many I am painting at the same time)... and that means a base coating each pustule Ratskin Flesh then washing it with Carroburg Crimson, adding another thin layer of Ratskin Flesh and then putting a rather small dot of Yriel Yellow on top.

While working on the daemons I am also preparing the bases. The theme of the army is swamp/flooded woodland. I still like it, but as I go with a rather big force I thought how I could put in some variety. I followed through on the idea I had about the Aegis Defense Line I am going to build for my Daemons... which lead me to adding corpses to some of the bases (1/3 of the bases per unit should have some on them). As I am a fan of consistency I went with the Corpse Fields bases from Secret Weapon Miniatures; I still had to sand the spongy looking texture of the bases off and add some sand to make the fit the style of the Blasted Wetlands bases I am already using. 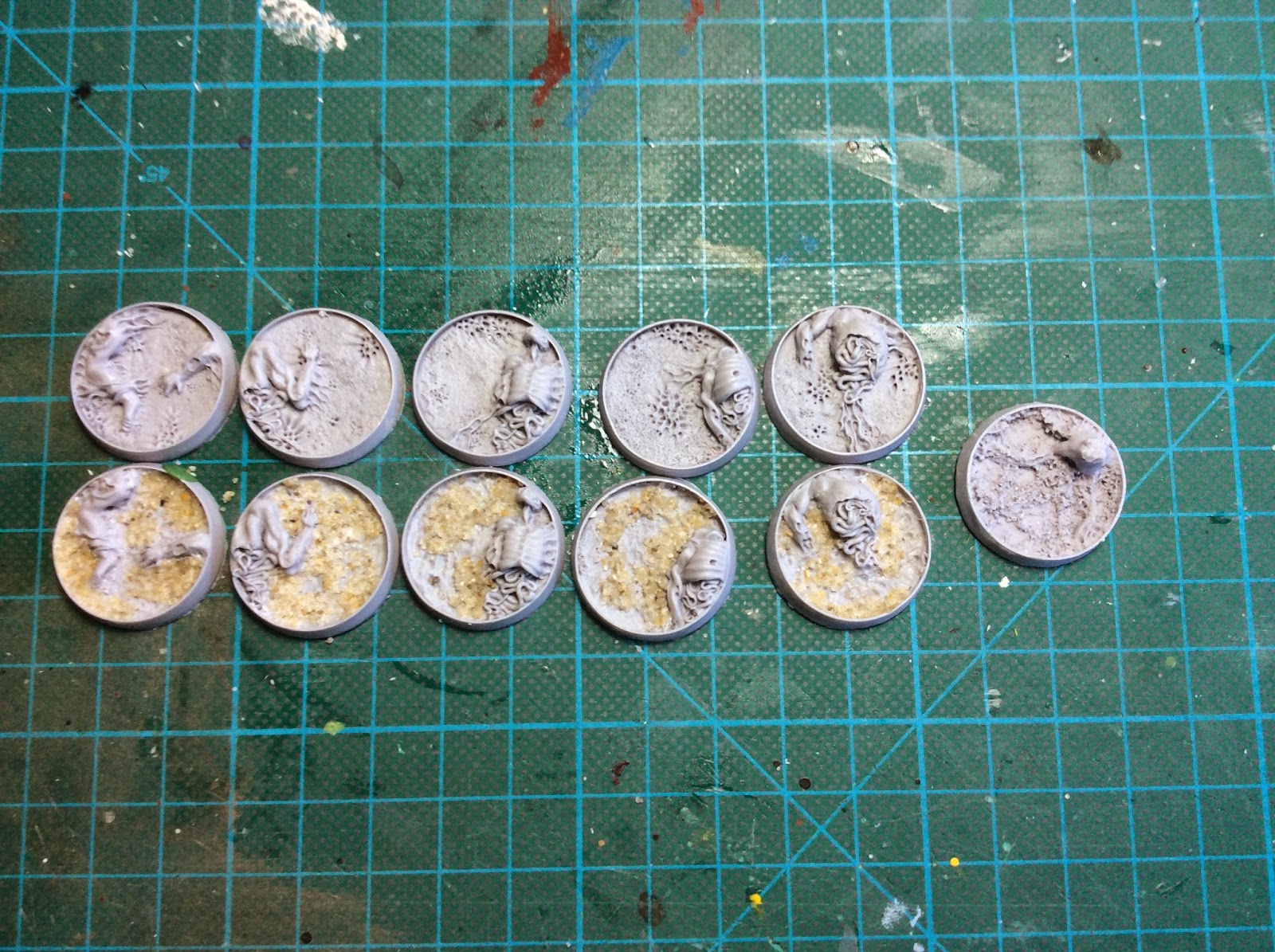 The bases are already done, and all I need to do now is finish of the daemons which - just by my guess - will take another two weeks or so. I had to experiment a bit with the skin tone of the bodies as I wanted to look them like water corpses. 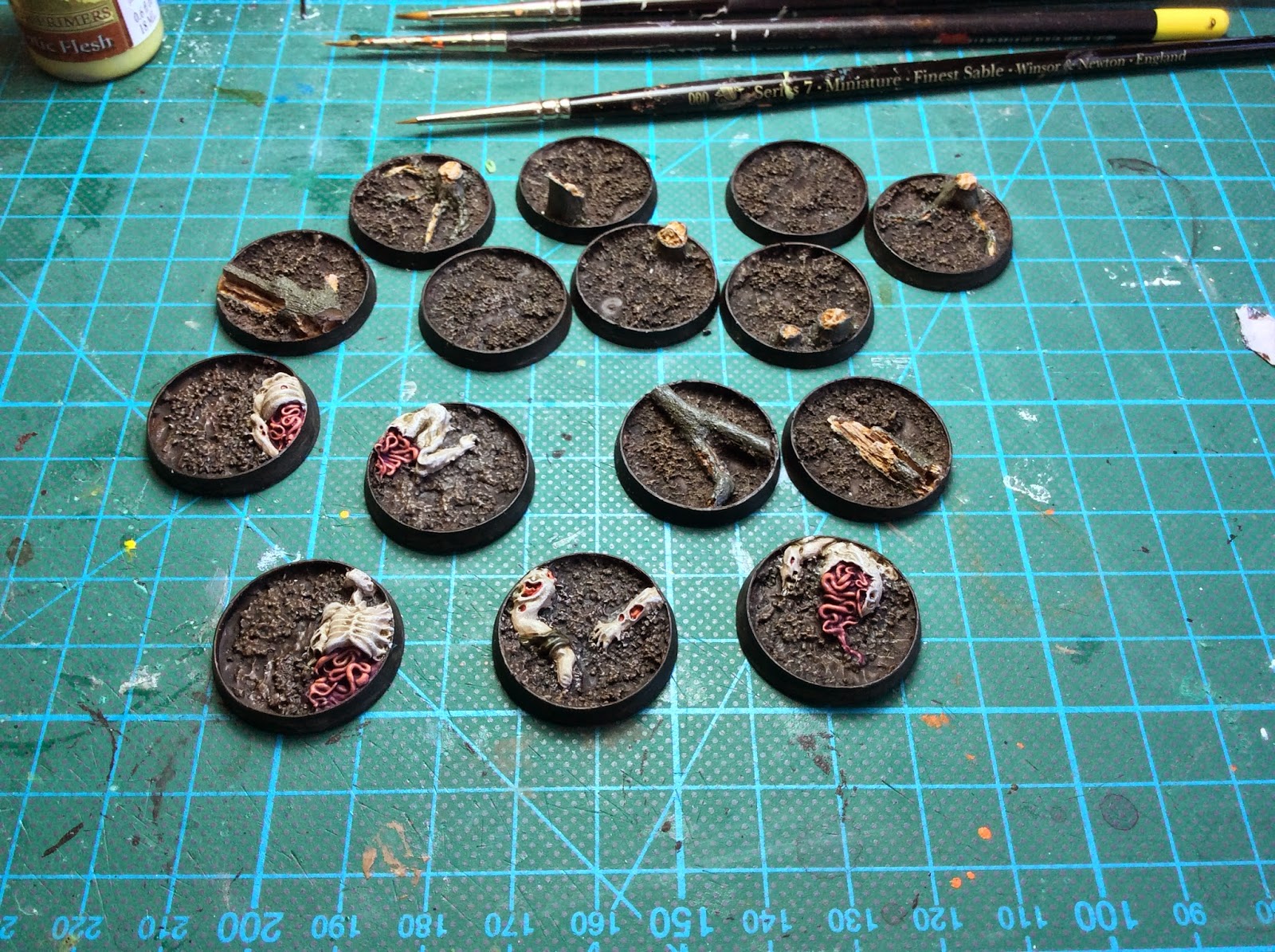 The little "theme extension" also granted me sufficient bases for the whole Nurgle force I plan to build (over time). Right now I am aiming at around 1500 points, but further down the road (once I had the chance to paint some power armor again... or some of those magnificent Battle-Automata) I would love to ramp up the force up to 2500. 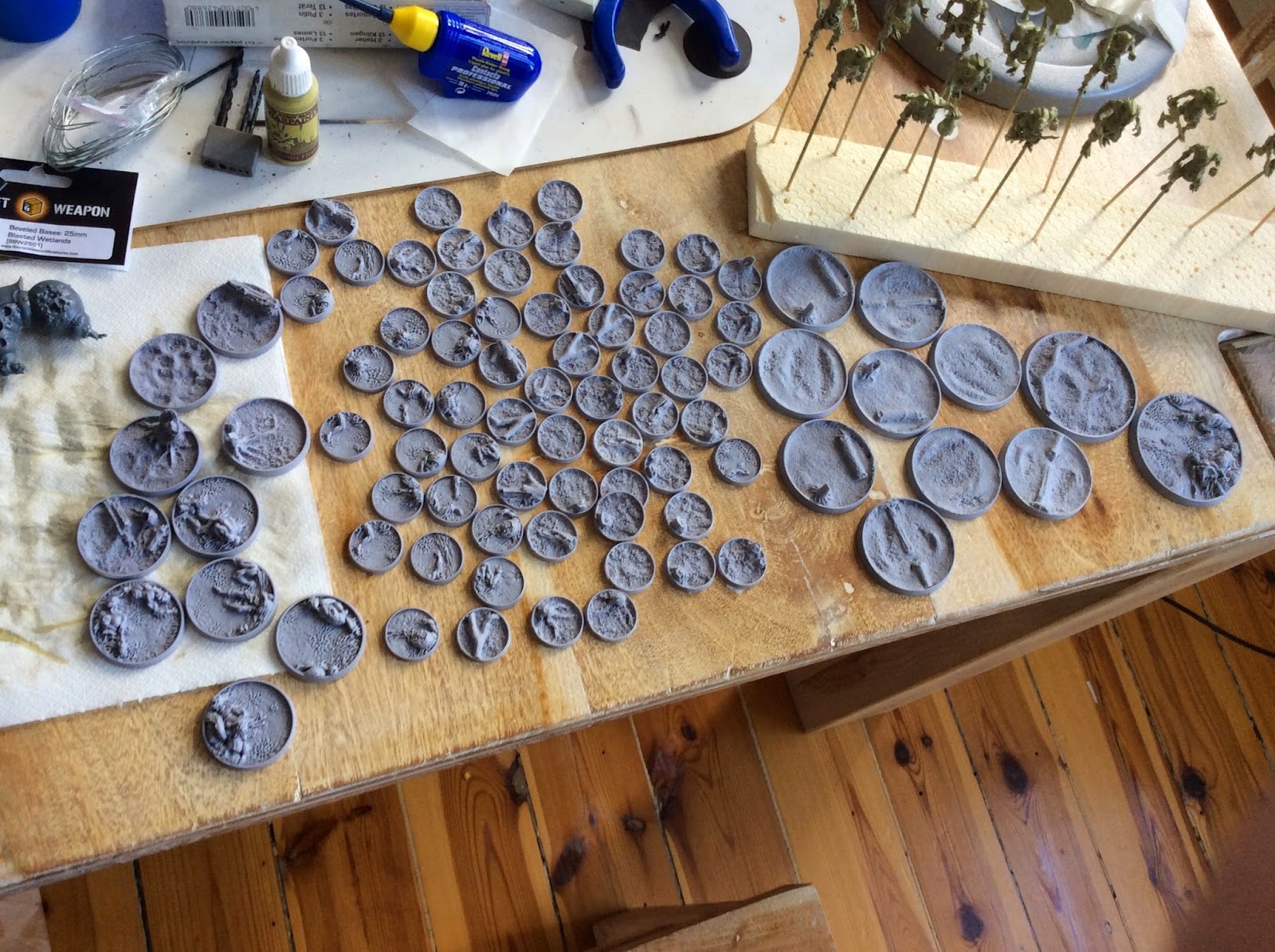