It has been two month since my last entry in this digital hobby diary (even though I had the intention to post more often). I was busy building Zombies to have them ready for a Tournament. Yes, after being at a 40K Tournament in June I joined the forces with a friend of mine to enter a Tag Team Tournament. I brought my Cult of the Maggot Chaos Space Marines (of Nurgle) and Chris his Orks.

Both, getting ready for the event, as well as the event itself were interesting experiences. Having a hard deadline to work against is definitely something beneficial to stay focused. At the same time you are so busy getting everything done that you are losing touch on other hobby aspects that you enjoy, like updating the Blog or simply picking up something different that you have on your work bench for some diversion. In the very end I won’t complain as I got 47 custom Plague Zombies ready for the table (more about them in a different post). 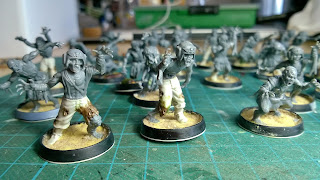 The tournament was all in all enjoyable. I personally just wanted to, even though it was a competitive event, play some games, meet new people and talk about the hobby. A nice side effect of tournaments is that you play against armies that you normally don’t face and that you are getting better in both mastering the rules as well as your own force. Chris has been to a lot of tournaments and is more experienced in this kind of (more) competitive environment. 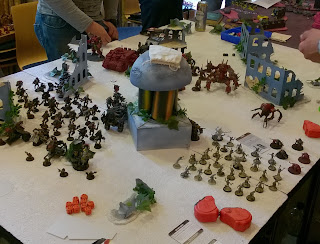 We had to play three games in total, each game had a different scenario with different ways to score points. There were primary, secondary and tertiary objectives. You had to take care of a lot of things and it was a lot of fun. The very first game (against two allied Chaos Daemon armies) and the last game (against two allied Khorne Daemonkin armies) were both relaxed and enjoyable, the kind of games I would have at home with friends on a weekend. There were some minor rule discussion to get clarification on how things should be handled, but also a lot of great moments and laughs. 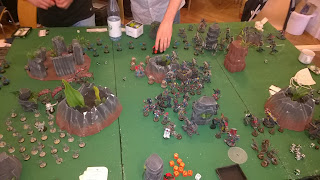 The second game we had was something very, very different: we faced a combined Necron force, let by two – as I call them – Hardcore Tournament Players (picture above). Their list wasn't too over the top, but the way they behaved made me feel uncomfortable from the start: they were very confident, (unintentionally) arrogant and, as they faced not so Hardcore Tournament Players, awkwardly childish. Of course they dominated us – they are among the best players in Germany/Europe and definitely know the game inside out - but this wasn't the main reason the first round of the game was annoying for me. It was because they play the game in a complete different way than I am. Once I realized this, it wasn't that annoying any more at all. It is actually quite easy to explain:

When I look at the table I see this: 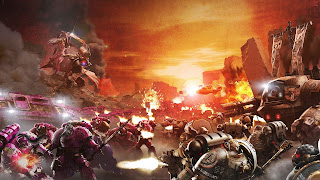 When "they" look at the table, "they" see this: 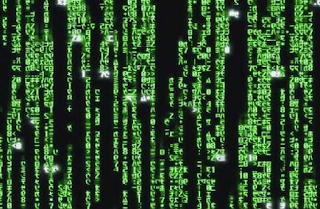 For me playing 40K is all about visuals, the background of the armies, the narrative and cinematic moments, to "them" it’s about numbers and statistics. We are not only on a different level with regards to actual gaming experience, we also have very different gaming culture. I am generalizing here, I am very well aware of that and I am sure that a lot of the more competitive players are also in the narrative aspect of 40K, but what I have witnessed during the Tag Team Tournament (there were more Hardcore Tournament Players) the Artwork vs. Matrix was the most straightforward (even though subjective) comparison for me.

I learned a lot in this game, not only about my army, but also about me and how other people enjoy the hobby. Some things might be better, more efficient and effective – like positioning models or units in a specific way (like some other Hardcore Tournament Players did like in the picture below) – but I would never do it nonetheless, because “in my 40K universe” no army would act like this on an actual battlefield. And for me playing 40K is all about the narrative/cinematic feel. 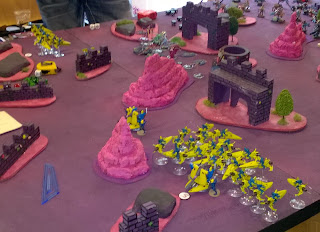 This doesn't mean I won’t attend any tournaments in the future, on the contrary. I will of course face players that only see numbers and statistics and they will stomp me into the ground, but I don’t care as I will still have the chance to learn a lot during those matches. But most important I will meet other 40’K enthusiast that want to have a great time while playing the game together (and not against each other).
Eingestellt von Unknown um 10:43 Keine Kommentare: